SSHD disks - a hybrid of HDD and SSD? Not quite. Data recovery from SSHD Seagate, WD and Toshiba 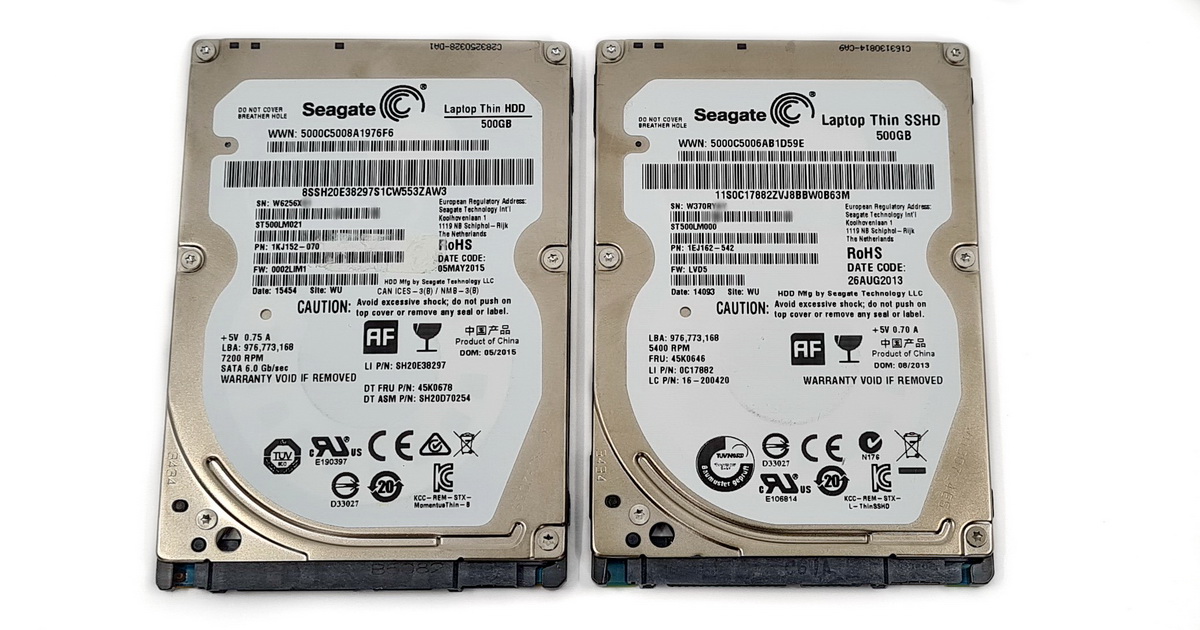 At first glance, an SSHD disk looks the same as a regular HDD and even on closer inspection both are very similar. The difference is in the NAND memory chip, which you won't find in a regular HDD. It is a piece of firmware stored to speed up disk initialization and it is used as a cache for user data. Last but not least it is often the source of the problem or part of it.

SSHDs are a response from Seagate, Western Digital and Toshiba to the demand for high-capacity, fast access disks. At a time when SSDs were very expensive and small in capacity, this could be an interesting alternative. We often find them in notebooks, where the user does not even know which disk is humming on his laptop.

A common cause of SSHD problems lies its NAND memory, which suffers from the same ailments we come across with SSDs. The memory service life is de facto determined by the manufacturer. This is due to the technological and physical limitations of this type of storage, which is supposed to handle a certain number of write and read cycles, therefore its gradual degradation is expected. Of course, its life cycle should be relatively long so that the disk can serve the user for many years. This is not always the case and NAND memory is a weakness of SSHD disks. The usual piece of advice also applies here: backup is the best way to prevent data loss.

When the NAND memory of the SSHD fails

The NAND memory is located on the electronics of the disk and is used to start the operating system faster. It contains frequently used service data of the disk, etc. The exact use varies according to the manufacturer and model. If this part of the disk fails, the user will lose access to his data, but the disk may (although not always) appear normal in the operating system at first glance.

The main SSHD data storage is a standard mechanical hard disk. The usual problems have the same and common causes: defective reading heads, damaged data platters or a defective disk motor. In connection with this problems occur in the service area of ​​the disk and, for example with Seagate disks, frequent problems can arise with the translator - an important adaptive module without which the data cannot be accessed. This is of course just one of many examples. Failures of reading heads and/or data platters are probably the most common serious cause of data loss in mechanical hard drives, but they are not always caused by a drive crash or an impact, as customers often tend to believe. This type of failure may even occur without any external intervention.

What to do and not to do when data is unavailable

Data loss is annoying and the user almost always tries to reconnect the disk on multiple computers. If the disk appears normal from the outside, this procedure usually does not do any harm. However, when unusual sounds such as clicks and growls emanate from the drive, the user should be alerted and at least contact a data recovery specialist for a consultation. This action prevents from more serious damage or absolute data loss.

Never attempt to disassemble the disk yourself at home and look inside for what went wrong. We have already received a number of disks in such a state: fingerprints on data platters, unprofessionally replaced reading heads, seriously deformed reading heads by some attempt to revive them and therefore destroyed data platters, and sometimes even parts of material inside the disk. So often, the disk is destroyed, but not necessarily by the original defect itself.

Contact data recovery experts for help if you know or suspect that your drive has failed. This will prevent you from more serious problems. And if you want to avoid data loss, backing up your data is the best prevention !

data recovery from all types of storage media

We will find the cause of any data loss and inform you of the chances of data recovery and its final price.