Some people mistakenly think that RAID is a self-saving solution and neglect regular backups. We will help you in case of failure, we are specialists in recovering data from RAID. 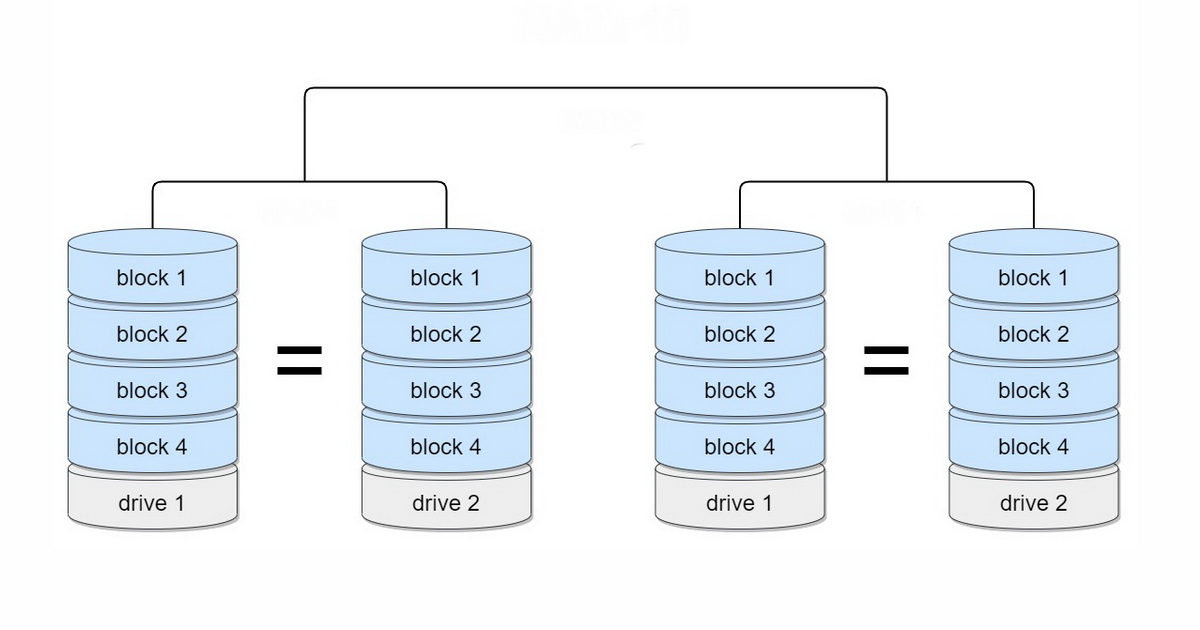 Due to the number of different RAID configurations and consequently the number and variety of problems that can occur, we dedicate several articles to RAID, starting with RAID 0, 1, 01 and 10.

RAID stands for Redundant Array of Independent Disks. It is a storage virtualization technology that combines multiple logical units to improve data performance and redundancy. The insidious word "redundancy" in computer science means higher fault tolerance. This is provided in RAID in various ways according to the selected RAID configuration. From the user's (or operating system) perspective, RAID then looks like a single disc (or multiple logical drives). In abbreviated form, we speak of a disk array or array.

A bit of history

RAID technology was developed by a group of scientists from the University of California, Berkeley, in 1987. They explored the possibility of the system recognizing two or more hard drives as a single entity. The result was a storage system that worked much better than single-hard drive systems, but with very low reliability. The researchers then came up with a redundant architecture for greater reliability. They have increased the fault tolerance of these data storages by this way.
The IT industry immediately took up and designed five different levels or modes, each with their own advantages and disadvantages in comparison to SLED technology.

The history of SLED (Single Large Expensive Disk) dates back about 25 years before RAID. SLED technology is based on the use of a single high-capacity and powerful hard drive, which is expensive due mainly to the need to store large amounts of data while maintaining error-free and availability without the use of any redundancy.

RAID 0 - or striped volume, is a combination of two or more hard disks. These disks are combined for better performance and higher volume capacity. Interleaving means that data is divided into blocks and distributed among disks.
The weakness of RAID 0 is its reliability. If one disk fails, data from the entire array will be lost. RAID 0 is therefore suitable for deployment where speed and higher capacity are crucial and the data dispensable.

RAID 1 - data is replicated from one disk to another. This architecture is known as "mirroring". The storage capacity equals the maximum capacity of the smallest disk in the array. For RAID 1, it is recommended to use identical hard disks. It is possible to use different disks, but then the data will be replicated between disks behaving differently (different firmware, different access time, etc.) and the performance of the array may then decrease, or such a combination may cause other problems. RAID 1 offers greater reliability, but the speed is at the level of an ordinary hard drive. It is therefore suitable for less demanding applications.

The data is interleaved in two identical RAID 0s and these replicate (mirror each other).

Data is mirrored in two or more RAID 1 and these mutually form RAID 0.

The main difference between RAID 01 and 10 is the disk failure tolerance. Of course, it depends on the specific configuration. In the above examples, 3 disks can fail in RAID 01, but all from one disk group. For example, if disks 1 and 4 fail, the entire RAID 01 will fail.
RAID 10 is more fault tolerant. In this example, one disk in each disk group (3 in total) may fail and RAID 10 remains functional.

If we compare performance and capacity, the values in both examples will be the same. Of these two variants, RAID 10 seems to be a better choice, and even in practice, we encounter RAID 10 more often when recovering data from RAID.

Whatever RAID you use, you need to think about backing up your data regularly. Multi Disk volume failures are more common than you might think. Last but not least, it is necessary to think about human error. Backup is therefore the best prevention even in the case of apparently robust data storages.

What problem can occur with RAID ? After all, the resilience of one or more disks should be sufficient.

RAID tends to make users confident. This overconfidence in technology, although usually very robust and reliable in principle, can lead to problems. Multiplying the number of disks multiplies the risk of one or more of them failing. In addition, the disks used in RAID are often of the same type and age, and therefore will have a similar lifespan. For this reason, it may make sense to use discs that are of the same model but not the same series.

We also encounter cases where the user buys a quality NAS, but already saves on disks and uses a model that is not intended for the NAS. Disks that are designed by the manufacturer for use in disk arrays (eg Western Digital RED, Seagate IronWolf or Toshiba N300) have higher resistance to vibration, are designed for operation 24/7/365, have a generally more robust construction, etc. Ordinary desktop disks are not suitable for RAID. It's a little different if, for example, you want to create RAID 1 (mirroring) on ​​your computer and it will still be used as a regular disk on your computer.

Another RAID failure scenario is when the user ignores the storage vault warning signals. Data storage (most commonly used in SOHO are NAS) has built-in features that can often detect a failing disk before it fails and alert the user. The orange LED on the device flashes, it can also warn with an audible signal, it sends a warning email, but the data is still accessible. The user postpones the solution until the storage fails completely. Then there is often nothing left but to turn to RAID data recovery experts.

The hardware (controller, motherboard ...) of the storage itself may also fail. While this may not in itself be a disaster for data, most users will not be able to access it without the help of RAID data recovery experts. Simply inserting the original disks into another storage device can result in data loss.

Last but not least, the human factor can play a role. Files can be deleted, overwritten or otherwise damaged.

It should also be borne in mind that the use of RAID does not provide any protection against:

Absolute trust in any data storage is therefore out of place. Regular backups can be done manually, but most of us are not able to strive to do so at regular intervals. The solution may be to replicate the entire storage to another, remote storage. NAS manufacturers have this feature integrated directly into the utility software of their devices. Here too, however, it is advisable to check the backup from time to time to see if everything is running as expected.

RAID is widely used from smaller home storage to enterprise storage in large companies. We solve quite a few orders for recovering data from RAID. Most often it is about saving data from NAS (QNAP, Synology, Western Digital, Lacie ...), but not infrequently from more robust solutions, which you usually do not find in smaller companies and households.

Whether you need help recovering RAID data on your NAS, server, home computer…, feel free to contact us. We offer consultation, collection and diagnostics of your device free of charge.

In most cases, RAID data recovery is successful. However, it also depends on the user's progress. If you do not know the advice, do not hesitate to contact us.

We will find the cause of any data loss and inform you of the chances of data recovery and its final price.